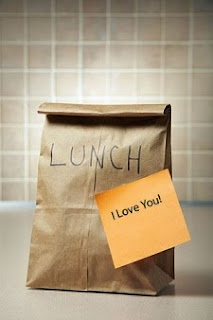 It amazes me how often I slump to new lows since I became a mother. Luckily this time it wasn't disgusting.

Last night I was packing my sons lunch for school when I noticed I had run out of his favorite kid friendly trail mix. A normal person in this situation may make a quick run to the store or pack something different but I am not a normal person. I had waited (and by waited I mean forgot) to start packing his lunch until it was too late to run to the store. I guess I could have sent something different but the school made me sign a contract stating I would only send healthy snacks and I doubted the Twinkies I had in the freezer would have qualified. I sat in the kitchen for a moment staring at my mess of a pantry. I wasn't looking forward to shuffling through old cans of Campbell's soup and open bags of corn chips to find something nutritious. But it was getting late, and I was certain that under the debris there were some yummy treasures hiding. I rolled up my sleeves and began digging. There was a small glimmer of hope when I spied a second box of trail mix hiding. I opened it quickly but found it too was empty. Now I was annoyed. Why would anyone put an empty box away? I left the box out on the counter so that I could bring it to my husband's attention later. I would have to give him yet another lesson in waste receptacles and their use. But now was not the time for a lecture; I was on a mission.

Before I went back to the pantry I looked at the box and studied the simple ingredients. The original store bought mix had the following:

Four ingredients was all I needed to make this work.

I remembered seeing some supplies that would easily fill the slots and suddenly my ability to improvise was sparked. (Improvising is like a superhero talent for me. Superman can fly and I can do thing like make Halloween costumes with only a few scraps of cloth and a roll of duck tape. It's a gift really.... ) I found a small box of raisins that had not yet reached their expiration date. I grabbed a plastic snack bag and dumped the contents of the box in. After the raisins a handful of goldfish cheese crackers was added. They were a perfect substitute for the cheez-it's and my kid, who is obsessed with marine life, would enjoy having "fishies" for lunch. I now had two ingredients down and two to go. All I needed was the sweet cookies and the pretzels. We had a small open bag of pretzel sticks. They seemed fresh but they were a bit large for trail mix. I grabbed two and broke them into little pieces. Now bite size, they entered the bag with the fish and raisins. My final ingredient, the cookies, turned out to be the hardest to substitute. I had some full sized Chips-ahoy but, when I tried to break them they tuned to dust. I could throw the cookies in whole but, it would ruin the theme. I needed something sweet, small and mildly healthy. I thought long and hard as I stood there eating my mass of cookie crumbs straight off the kitchen table. My eyes were still fixed on the open pantry as I ate. Then suddenly, a brilliant red box caught my eye. "Fruit Loops", not only were they small and sweet, they also had the name fruit in their title which in my mind signified nutritional value. It was the perfect solution. I grabbed two small handfuls, tossed them into the bag and zipped it shut. I was pleased to have finally finished my recipe but that's not why I found myself smiling. Though I was happy to have made do with what was in the pantry I couldn't help but laugh out loud at the crude contents of the bag. The mangled pretzels, the colorful "O"s that stood out against the orange fish swimming in a sea of raisins. What would the teacher think? I wasn't sure, but I knew what I would have thought,"Holy crap kid, is your mother on dope? Poor kid..." With a sigh, I shoved the food into his lunch box. I hid the trail mix under his cheese sandwich and inserted a note to Carter but obviously it was meant for the teacher. It read...
" Dear Carter,
I know you like variety so I threw some of your favorite things together. We ran out of the usually trail mix you like, but Mommy will buy more today while you're in school. Love you!"

I hoped the note would clear up any misunderstandings about my recreational drug use.

When he returned from school I checked his lunch box. The baggy was still inside filled with all the goodies. It looked as though he hadn't touched it. The note was also still there but I noticed it had something written on the other side. In response to my love note the teacher replied: "Mommy, just pack fruit next time. I like that best!"

I guess all superhero's have their Kryptonite. And it seems creating healthy snacks is mine. Next time I'll save myself the trouble and just pack fruit :)