Notes From The Teacher

Recently my 2 year-old son started nursery school. He never cried or put up a fight. He always strolls happily into the classroom and greets me at the end of the day with a smile. I wish that I could say the same for his teacher. The first week of school the teacher brought two things to my attention. My kid who normally sits quietly while being read too has now become a little fidgety. Also, he refuses to put toys away when he's finished playing with them in the classroom. The teacher suggested I work with him on these things at home. I smiled at her and told her with all the sincerity I could muster, that I would try, then I got in my car and festered. At home my little guy loves to sit and listen to stories and as for cleaning up, if I start he always tries to pitch in. As far as I'm concerned, if he's having trouble with these things in class, that's where they need to be dealt with. I pay butt load of money for my kid to go to school and I feel that once he's there it is the teacher's responsibility to teach him how to focus in a classroom environment. Strange concept, right? I don't have seven other children running around causing distractions so, how exactly am I supposed to create the environment he's having a problem functioning in? I didn't want to stress out about it so I told myself I would let the teacher deal with it. After all, he's her problem between the hours of 9 and 1 on Tuesdays and Thursdays.

It seems my do-nothing approach worked because my little monster's focus has improved. At least, I assume it did, because I haven't heard another word about it since. Unfortunately there's a new issue that has alarmed the teacher. Something so big that, verbally warning me wasn't enough, the teacher sent a note home too.


When I came to pick up my kid yesterday, he greeted me like he always does, jumping and screeching. It's a lot like when you go to the pound to buy a puppy. He has exactly the same reaction as a death row mutt does when it's released from a cage, only my kid rarely pees on my shoes. The teacher approached me with a concerned smile on her face and I knew there was trouble. She handed Carter off to me and said that he had some "trouble" with sharing. My gut wanted to react. I wanted to say "So!"but before I could speak she continued. When he wanted something one of the other kids had he tried to bite them. Then she asked me to have a talk with him about being kind to his friends. I looked at her a little confused. Did she really just ask me to have a conversation with my 2 year-old about biting his peer's? Maybe when I'm done with that I can have a chat with the dog about using the toilet. Annoyed by her stupid solution I tried to clarify exactly what happened , "So let me get this straight, he never actually got his teeth on anyone?"


She said "NO" apparently they were quick to break up the confrontation when my kid bared his teeth, keeping him from harming anyone. Now I had more questions, though I never spoke them out loud. If my kid was going to bite and you were watching long enough to keep that from happening, why didn't you stop the fight earlier? Maybe it was self defense. Maybe little Timmy was asking for it. I walked away, my head swirling with questions. When I got home and put Carter down for his nap I checked his communication folder. Inside was the usual progress report but it wasn't filled out the normal way. Usually there is a section that explains how he ate and whether or not he had a bowl movement. Today that part was left blank because apparently eating and pooping take a back seat to biting. In the space below there is a comment section, it was filled out, but had more words than I was expecting. Scrolled on the paper was a note that said "Please remind Carter to keep his hands and mouth to his own body." In a moment of mommy madness I envisioned sitting my kid down to explain the problem at hand. He would be squirming and laughing. He might even look me in the eyes once or twice, but understand what I was saying; No way! I fought the urge to write the teacher back. I wanted to send her a note that said as punishment I made him write the words "I will not bite my classmates" 100 times. Then when he finished, I made him write an essay about what he learned. I would end the note with "Consider him reminded." I figured it would be an equally ridiculous response to the teacher's request of lecturing him at the age of two and expecting results. My better judgement took over and I managed to control myself. I did however think of a few more ways to keep his biting under control. Ways that would be more effective than a talk. Ways that would probably have DCF banging down my door, but hey a girl can dream. I've taken the liberty to write a few alternative notes to the teacher. Feel free to vote on your favorite or add one for my consideration. You never know I may snap one day and send it

"Dear Teacher,
Enclosed in Carter's back pack is a roll of duct tape. Feel free to use it as arm restraints or a muzzle. My husband and I feel that our son may not have been listening when we spoke to him. Just in case, we thought the tape would solve any new problems. Sincerely, Carter's mom"

"Dear Teacher,
My husband and I feel that Carter's biting may have been a reaction to something one of the other kids did. Please understand, while we don't condone violence, sometimes it comes down to fight or flight. Unless Carter is capable of sprouting wings, we feel his decision to defend himself was warranted. Maybe you should take the time to remind his classmates about personal space before you lecture me about my kids reaction to his being invaded. Sincerely, Carter's mom"

"Dear Teacher,
Since Carter's problem seems to be keeping his mouth and hands to his own body my husband and I decided to enroll him in kick boxing. We noticed that you did not specifically say anything about using his legs so, we assume that a round house kick would be more acceptable than biting. Sincerely, Carter's mom"

"Dear Teacher,
While "reminding" Carter about being kind to his friends, my dog brought up a good point. Do you think that maybe the student's are reacting to your shortcomings as an educator? Think about it and get back to us. Sincerely, Carter's mom"
(I used the dog to prove a point. The point being that talking to a two-year old is crazy. OK, not quite as crazy as a talking dog but, you see where I was going now.) 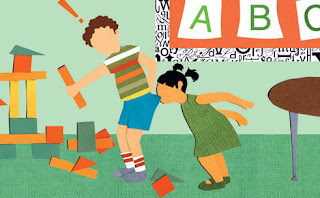