Have you ever done something for your child, with the best of intentions, just to wind up regretting your choice later on? If you have, you maybe suffering from S.A.S (Stupid @$$hole Syndrome).

I never realized that becoming a parent and being a stupid @$$hole were mutually exclusive. It wasn't until my most recent act of stupid @$$holeness that I made the connection. You see, as a mom there are certain things I do to make my child quiet, happy and/or entertained. While doing these things, I sometimes neglect to see how they will affect me in the long run. That's when S.A.S kicks in and takes over. It is a personality disorder that affects millions. One minute your a high functioning parent, the next you are a Stupid @$$hole. When my S.A.S flares up, I am no longer able to fix the problem at hand. Though I may attempt to, the outcome will only be a bigger problem and never a happy solution.

I would like to share my top four S.A.S moments. While you're reading, you may notice that there are different variations of the syndrome. It's a sliding scale disease and therefore changes based on the situation. Though I only list four types, there are many more that you may experience throughout your parenting career. At this time there is no cure for S.A.S, but it is manageable. Let's work together to raise awareness. The next Stupid @$$hole we save may be you.... 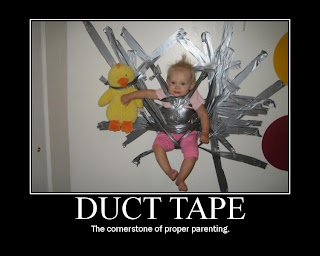 1} The DVD incident.
My child loves watching videos and I love that he does. It's a sure way to indulge in some "me" time without having to pay someone to keep an eye on him. The problem with all the video watching is that we burn through DVD players at an alarming rate. Not because he's sitting watching videos all day, but because after he's done, it's much easier to leave the DVD spinning than to turn it off and have to go through all the preview B.S the next time he wants to watch. To a normal person, waiting for a movie to load is not a big deal. To someone suffering from S.A.S, it's agony. Recently my only surviving DVD player joined the mechanical spirit in the sky. It was late in the evening, and my kid was jonesing for some "Nemo". I had to do something fast because his whining was pushing me over the edge. I remembered suddenly that the portable DVD player he uses in the car had an adapter to make it play on the big TV. I ran to the car and retrieved it. When I got back inside I realized I would need to hook it to an AC adapter to make it play. Unfortunately, I missed placed the one that it came with, so I opted to use one I had lying around. It was at this point that the most prevalent type of S.A.S kicked in. I was no longer mommy; I was a Stupid @$$hole. I attached the cables from the TV to the DVD player and then plugged in the AC adapter. About three seconds later, I noticed that there was no picture on the screen and at the same time there was a strange electrical smell emanating from the Portable device. On closer inspection, I could see small burst of smoke exiting the exhaust holes on the DVD player. In my attempt to give my kid a fix, I murdered yet another innocent machine. Now I was screwed double time. Not only was there going to be no "Nemo" tonight, there was also going to be no video distraction in the car from now until next pay check. I thought about trying to warranty my now fried portable DVD player, but wouldn't you know it, there is no Stupid @$$hole clause in the paperwork...

2} Shoelaces
Normally, I try not to buy shoes for my kid that involves laces. My reasoning for this is that he is not old enough to tie them himself, they are always hard to get on fat toddler feet and I'm lazy. It's not worth the trouble when Velcro shoes (a lazy persons dream) are just as easily obtained. When my little monster started nursery school, I decided to give him a fighting chance at popularity, so I purchased some trendy running shoes for him to sport. The running shoes, while very cool, had one down fall; they were lace up. To ensure his safety, I double knotted the laces. My knots where so perfect and sturdy, they would have given any boy scout a run for his money. Looking fly, he headed off to school and had a great day without any shoe related incidents. After school was a different story of course. The second my kid got in the car he wanted his trend setters removed. I tried hard to undo the massive knots I had tied, but they wouldn't budge. I ripped them from his feet, still tied, and worked on undoing the knots after my kid was down for a nap. The second the unknotting process began, S.A.S kicked in. I was now a Determined Stupid @$$hole. When picking at the laces with my fingers got me nowhere, I used my teeth to tug at them. When that didn't help I grabbed a fork and started prying at the knots. When I slipped with the fork and stabbed myself for the third time, I chucked the shoes at the wall, cursed loudly and stumbled off to bandage my puncture wounds. After a quick smoke to calm my frustration, I returned to my project. With no other options left, I took a pair of scissors and cut the knots free. When my kid awoke from his nap we made a run to Walmart and purchased a new pair of shoes with Velcro straps. I find that S.A.S is best controlled if you try to cut out the things that trigger it.

3} Store Pacification
I am positive that I am not the only parent that allows my child to play with an unpurchased toy while walking through a store. I find it keeps the whining and tantrums to a minimum, allowing me to shop or browse peacefully. Not too long ago, my monster and I were on an outing to find a reasonably priced birthday gift for a friend. My kid was in a stroller and unhappy about being restrained. When we entered the store, he quickly spotted a children's book lying in the first aisle. To keep him quiet and my expedition peaceful, I gave him the book and continued on my mission to find a gift. After 15 minutes of wondering around clueless, I decided against a gift and settled on writing a check instead. We exited the store and made the long, hot journey out to our crummy parking space. I unlocked the car and started the engine before reaching to put my kid in the car. When I finally glanced down to remove him from the stroller, the third form of S.A.S came over me. In his little hands was the book he was looking at in the store; the book that we never paid for. It was so hot and such a long walk back to the store. I just didn't have the energy to walk all the way back and face the humiliation. Tanks to my S.A.S, I was now a Thieving Stupid @$$hole. To this day, I still feel guilty for what I allowed my two-year-old to do. DAMN YOU, S.A.S!!

4} Too much Ha, Ha! Pretty soon, Boohoo.
Having an energetic, young son, leaves me to constantly search for fun new activities. He loves to tumble and wrestle. And to be honest, it fun for me too. One day my little monster and I were wrestling on the couch. After a while, I got thirsty. To keep the excitement going, I snatched him up and carried him over my shoulder into the kitchen with me. I took a quick moment to rehydrate, then ran him back to the living room. He was laughing and kicking his legs. We were having a blast. But then the worst form of S.A.S kicked in. The moment I decided tossing him on the couch was a good idea, I became Child Endangering Stupid @$$hole. It took only a second for me to realize what was happening but it was too late. I had already tossed him. I cringed as I watched him bounce up and whack his eye on the back of the couch. Because we were goofing off he only cried for a second. I however, cried for a few days. He sported a black eye for a week and I felt horrible every time I looked at him. That day, I vowed to never allow my S.A.S to hurt anyone, other than myself, ever again. I fight hard every day to stick to that promise. I hope by sharing my stories, I can prevent you from allowing S.A.S hurt someone you love.

**Do you or someone you love suffer from S.A.S? Feel free to share your story with the Mouthy Mommy. The best stories will be posted on MouthyMommy.com next week. You may remain anonymous if you wish.. Send your entry to Mouthymavens (at) gmail.com.. Thanks in advance!
Mutterings by Jennie Nadler Milechman at 12:49 PM