I recently saw a commercial announcing that Barbie has made yet another career move. Aside from being a Model, Teacher, Police Woman, Photographer, Fashion Designer, Military Officer, Paleontologist, Airline Attendant, Pilot, Ballerina, Chef, Hairdresser, Veterinarian, Astronaut, and my favorite McDonald's Cashier, she has now decided in her free time to grab a medical degree and take up Pediatrics.

While I appreciate Mattel's attempt to cover all the bases it seems to me that they are leaving out the most important job of all; the homemaker. While this may not be your first career choice for little Sally, I think it's a more realistic job avenue than becoming a starved female Astronaut with fake breasts. Think about it, Barbie is constantly receiving flack for causing young girls to develop body dysmorphic disorder and poor self esteem. It almost seems irresponsible not to add a more modest member to the Malibu clan.

I thought about how to put my plan in action and only came up with two solid options. The first was to write a letter to Mattel. the second was to create.

The problem with the first and easiest solution was that I knew Mattel would shit-can my idea immediately. The feminists have been banging on that door for years, and all they got in return was a belly button placement on the doll. Plus, I'm sure that after all Barb's been through there is just no way Mattel would have her stuck in the Malibu dream house rocking babies and ironing Ken's work shirts. If I wanted results, this housewife would have to take matters into her own hands and that's exactly what I did.

I decided to get started right away and ran to my local toy store to pick up a few supplies. It turns out that Barbie is more than just an over-achieving career woman. That showy bitch is a thief too. I know I shouldn't take it out on Barbie when her pimp Mattel is setting the prices, but $40 for three items is absurd!

After shelling out the 40 bucks (eye roll), I came home and got to work creating my masterpiece. I must have been high off of nail polish remover fumes because I lost track of time and before I knew it, my husband arrived home from work. There was no hiding the fact that he was concerned to see his almost 30-year-old wife playing with dolls, but I assured him that I was a professional and not a lunatic. I told him that when I was 15 I took a doll making class at a local art center. However, I did intentionally omit the fact that I dropped out after three weeks without ever completing one project. That part would have just encouraged his lunatic theory.

When my doll was finished I gave her a bio and put together a small marketing plan. I'm very proud to show her off to the public but remember this is just the prototype. I plan on spending twice as much time developing the real thing. I just have to find a day when I have 20 minutes to kill first ... Hope you like her!

Bio
While Barbie and her friends were out making a name for themselves, Housewife Helen decided to quit college and settle down with Business Bob. They wasted no time starting a family, and now Helen works hard to keep the dream house in perfect order while keeping a watchful eye on her young child. Business Bob works for a debt collection agency downtown and expects dinner on the table at 5:30 p.m. every day. Housewife Helen never disappoints him. Though her day can be flustering, Helen maintains a constant smile courtesy of the antidepressants she was prescribed when her child was born.

Design points
Unlike her her blond counterparts. Housewife Helen has only two clothing options; Velour track suit or robe-covered pajamas. Because she was created in a real mother's image, there was no need for face make-up. Instead we (by we, I mean I keep a little mouse in my pocket) at Momtel simulated sleep deprivation by adding dark under eye circles and a complacent brow line. Keeping her appearance life-like and motherly was important so we also made sure to style her hair into a low maintenance, short mom 'do that requires little to no brushing. 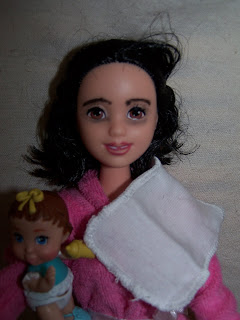 Housewife Helen comes with all you see here: 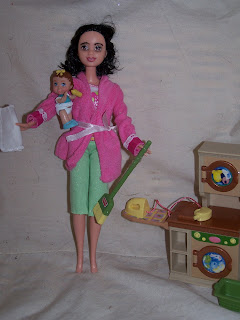 Kids will have endless hours of fun helping her sweep, do laundry and feed her tiny baby. But the excitement doesn't stop there. Push the button on Housewife Helen's back to hear her really speak.

Her six catch phrases are sure to give your child a misguided sense of reality that only a small plastic replica of a woman can.

* "Being a housewife is so much more rewarding than a nine-to-five job."

* "House work is fun, I love cleaning up messes I didn't make."

* "Life is easier when your husband makes all the decisions."

Coming soon from Momtel is Business Bob. He completes the family and has lots of fun accessories too; like a removable wedding ring and a flask that really works. His play set includes Helen's dream house, equipped with a large eat-in kitchen, expansive laundry room and one nursery.

Instead of Barbie's "Be who you want to be" slogan I thought we could go with something like "Be married and let your husband be whatever pays the bills." It seems a bit long though.

We at Momtel strive to do just enough to look busy but we would love your feedback anyway. Please feel free to comment and tell us what you think.

*I find her to be a great role model. Unlike Barbie, Helen doesn't make me want to starve myself or go out and buy expensive clothes my parents can't afford. Personally, if I would have had the opportunity to play with Housewife Helen as a kid I think I might have tried harder to finish college and waited longer to have kids.-->Little mouse in Jen's pocket

-- Thanks little mouse. I value your opinion!