Though leashing your child in public is a growing trend these days, it was difficult for me to make the decision to try it. Growing up my mother was never shy about expressing her distaste for moms that pranced their children around in public like a two-legged Basset Hound. Her mentality was that if you instill the right amount of fear into a child they would fall in line like baby ducks and stick closely by their parents side. In our home she took the baby duck theory literally. We were forced, every time we entered a public place, to line up behind her, hands tightly locked behind our backs, and follow quietly.

My father, who was not the primary caregiver, found that this worked well in the presence of my mother, but left alone with him, he took his own precautions to keep us safe. One time during a father-daughter fishing trip, Dad decided not to take any chances and tightly secured a rope around my five-year-old waist while anchoring the loose end to the car door. Having a rambunctious little girl standing quietly on the bank beside him he needed insurance that there would be no water-induced incidents. I'm sure that he never filled my mother in on this, and it was probably for the better.

Because of my upbringing I too harbored a strong aversion to leashing children. It seemed absurd and embarrassing. That was until I had a rambunctious son of my own. As Carter grew and became more curious, he was less inclined to sit quietly in a stroller while I skipped around enjoying my freedom. When the struggle to keep him contained became to much (and my mother was dead and unable to comment), I broke down and bought a child harness.

I was able to purchase a fun, puppy dog, back pack leash at my local Target retailer for $11.99. The first time we used it I knew it was money well spent. Carter got his freedom, and I was able to shop without the fear of 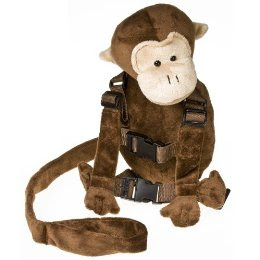 losing him in a crowd.
I noticed there were few instinctual things I wanted to do while I was out "walking" my son. I'm sure the feelings came from many years of owning a dog. I knew these urges were completely unacceptable and decided to make a few laws to help govern my behavior while we were out in public. If your new to leashing your child I hope these will help you too.

The Leash Laws
#1) Never, and by never I mean in front of onlookers, tug on the lead to make the child fall in line. At times it may be tempting when Jr's taking off on his own route, but just remember it looks a lot worse from an outsider's point of view. If you didn't have an obnoxious kid what would you think?

#2) It is not OK to tie your child to a park bench, car door, water fountain, lamp post, or chair leg. While it may allow you a short break from Jr, I promise the consequences are not worth it. Five years in prison for child neglect is not worth the five minutes of peace you'll receive.
#3) Do not drag your child unwillingly, legs buckling underneath him, through a department store. It may seem like a time saver (and it probably is) but nothing will make store clerks and patrons dial D.C.F faster.
#4) Don't be cheap! Buy a real child harness. Home-made versions like my father's "safety" rope may be tempting because it will only set you back about 2 bucks, but I promise the barbaric nature of it will call more attention to you than just letting Jr run a muck through JC Penny's. Trust me it's worth the $12.00.
While these laws may help you control your animal instincts while "walking" your little monster, know that by no means, does it reduce the embarrassment you feel with that animal tail leash fashioned tightly around you wrist. People will stare, old ladies will comment, but keep in mind it's whats on the end of the rope that really matters. Your just providing safety.
If you want to check out the harness I purchased clink on this link:
http://target.com/Eddie-Bauer-Harness-Buddy-Monkey/dp/B001OB9LBI

They come in a variety of different animal buddies.
Mutterings by Jennie Nadler Milechman at 11:18 AM