The Mouthy Mommy Goes To The Gun Show...

In an attempt to earn some extra cash this holiday season and give my family all the useless crap they want but do not need, the Mouthy Mommy decided to take a weekend job. Unfortunately for me, it was a gig at the West Palm Beach Gun Show. Fortunately for you, it was a complete disaster and left me with much to write about. 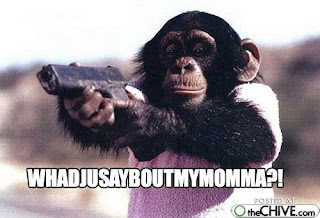 Let me start by setting the scene...When I pulled into the parking lot of the gun show, I was overwhelmed by the sight of Ford and Chevy pickups adorned with the always classy, Truck Nutz. For those of you who are unfamiliar with "Truck Nutz" they are plastic testicles that attach to the undercarriage of your vehicle. In Redneck Land they are considered an automotive improvement, like window tint or a sound system. As I exited my car and walked slowly to the front gate, I could see a massive amount of men waiting in line to purchase tickets (That's right, tickets to the gun show). 90% of them were all business in the front and party in the back. Meaning, the mullet ratio was off the charts. The only quality that was more abundant in these men than mullet haircuts, was obesity and camo covered Wrangler jeans. Which is probably why my attire of skinny jeans, white long sleeve shirt and pink scarf had me sticking out like a turd in a punch bowl (I actually heard someone say that while I was there). As I tried to contain my laughter, I picked up the pace and made it to the front doors where I had the privilege of being the only woman vendor waiting to enter the expo center. I looked around at the guys that I would be working beside and realized that between the 20 of them, there wasn't one full set of teeth. Not even if you put them all together in one mouth. It was outstanding and I knew right then, that I would be learning a lot on this job.
I just wasn't sure at that moment, what it would be.

The inside of the show was as exciting as the outside. The tables were full of high powered assault rifles, giant knives, WWII memorabilia (complete with all the Nazi garb a young skin head could dream of) and tasers as far as the eye could see. In an attempt to keep the show a family affair, there were also a few booths set up with cheap, pink camo clothing and chintzy kids toys complete with choking hazards, made only in the USA. My favorite item of the day was the lipstick mace. Printed in bold red letters on the front of the package were the words "Never be date raped again!" Which got me thinking, is date rape that much of an epidemic in Redneck Land? Are woman repeatedly having this problem? Holy shit! If I was date raped more than once, I don't know about you, but I think I'd forgo the mace and become a shut in instead. Finding Mr. Right just doesn't seem worth the emotional scaring.

After taking a quick moment to evaluate my surroundings, I sat down at my booth and began the longest 8 hours of my life. I wasn't there to sell anything. I was just there to babysit a small batch of fliers, provided by the pawn shop I was representing. None of the patrons noticed I was there and I was left to sit alone. Well, kind of alone. I had 3 lovely vendors sharing space with me and because we shared space they felt we should also share conversation. I didn't necessarily feel the same way. I was hoping to do my time, make some cash and forget that places like this hell hole, ever existed. Making friends was the last thing I felt like doing, but I forced a polite smile anyway when I was greeted by Humpty Dumpty, the scope salesman on the left of me. After all, it wasn't his fault my invisibility cloak was malfunctioning. Humpty, was bald and egg shaped. He was also very eager to let loose about his theories on global warming. That's when I learned my first bit of redneck knowledge. According to Mr. Dumpty there is no such thing as global warming. It's just a fancy word that scientist use to make money. Ice bergs are not melting and there is a huge abundance of Polar Bears that hang out in Canada, all we have to do is spread them out and they will no longer be on the endangered list. I'm not sure how this conversation began or where he got his facts, all I know is that seconds after I said "hello," Humpty took me on a magical journey through stupid land and I haven't been the same since.

Upset with the fact I would never be able to get back that 20 minutes of my life, I walked outside for a smoke. It was at this time that I passed two men having a conversation. I'm not sure what they were talking about, but I do know that one of them felt that the gun show was, and I quote, "Mind bottling!"

On my walk back from my smoke break, I passed some interesting art work. One blatantly racist piece, was a photograph of President Obama shinning Sarah Palin's shoes. Even though I found it offense, it seemed to be a real crowd pleaser. I actually saw children under the age of ten, pointing and laughing at it. This proving my theory, that stupidity is genetic and possibly contagious.

Though the entire weekend left me feeling like there should be a law against allowing any of these people to reproduce, operate a firearm or teach school age children, I did find one person there that wasn't half bad. The NRA was kind enough to provide a Sara Palin impersonator and I was lucky enough to get a picture with her. I personally think the real Sara is an idiot, but in the gun world she is as popular as baby Jesus and Budweiser. They absolutely love her and they can't wait for her to run for office in 2012. (If you want to know if the world will end in 2012, elect that woman into office and I promise Armageddon will follow.) Anyway, Patsy the fake Sarah allowed me to hold a big gun in the photo. I'm not sure what kind it was, but I did learn that it is A) illegal to take a picture with a gun if your finger's on the trigger and B) the Palin look alike does not like it pointed at her face. She says it's because she didn't want it to look like I was shooting her lipstick off. I think she was missing that it was exactly the look I was going for. All jokes aside,Patsy was a nice lady and I'm saying that genuinely. Not just because I gave her the link to my website. 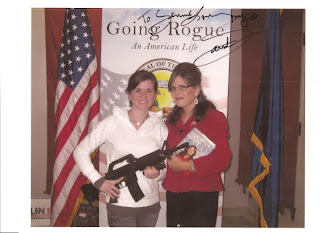 It was amazing how much she looked like the Governor. If you want to check out her website( and trust me it's worth a look) you can find her at http://www.sarahpalinimpersonator.com/ .

So, though the gun show was a complete waste of my time, it did teach me a few things. 1) That I will do pretty much anything to make a few bucks and 2) that I have no business working a gun show...EVER. I also learned why I should never own a gun. Until there is proof that gun ownership doesn't cause retardation, I'll stick to finding other ways to protect myself. Maybe I'll start toting a bow and arrow or better yet I'll strap on my tinfoil helmet and will the Canadian Polar Bears to guard me... Damn it! Looks like stupidity is contagious. Somebody get me a gun!