I am always looking for new things to write about. Sometimes I use my real life experiences and sometimes I pull from outside sources of stupidity. Last week I received an e-mail from my father containing a link to an article he had found. ( He likes to use his free time to surf the web and when he finds something kid related he shoots it over to me. A few weeks ago he sent me this: Baby's First Bong) 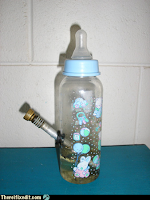 So when I read the title "Are Pink Toys Bad for Girls?", I instantly thought that it was going to be a picture of a young girl holding a pink vibrator or maybe a pink crack pipe. I wasn't sure, but I was assuming it would be inappropriate on some level. I guess that's why I was shocked when I opened the page and found an actual article. Could it be that he finally sent me something of value? I read through it quickly looking to see if scientist found a link between the color pink and Autism in girls? Was pink causing girls to commit suicide? Did pink cause cervical cancer? NO, of course not!!! The only thing the color pink's doing is causing feminist to lose their shit. And I'm assuming the only reason my father sent the article to me is so that I would lose mine.


Let me start by summarizing the article. Two women in the U.K got their panties in a bunch when they entered a toy store and "noticed the toys they sell are clearly marketed for girls and boys based on color" These idiots quickly formed an alliance with more idiots and are protesting under the name "Pinkstinks". They feel that, "pink dresses, kitchen toys, dollhouses and other playthings rendered strictly in rosy hues teach girls early that they have different roles than boys. This process causes girls to value beauty over brains and fosters an obsession with physical appearance." Pinkstinks has also gained the support of a former consumer Czar (not sure what a consumer Czar is, but I'm guessing it's a Queen term; like power bottom and that also, he is an idiot) Ed Mayo, agrees that the "color apartheid" puts children on different paths in life. Then like any idiot supporting bullshit he changes his tune and says "while it might not be the color pink's fault, one of those paths definitely leads to lower pay and status than the other."

Really?!? How typical of an idiot to fight a battle over something that "might not" be the reason for the problem. ( I wonder if these women and their Czar were Bush supporters?)

Here's my take on the whole thing....
**The reason boys and girls have different roles is because, guess what...They are DIFFERENT! It's science. If you have a problem with that, maybe you should stop reproducing.

**Stop blaming toys and colors for crippling girls ability to make a decent life for themselves when they grow up. If your daughter's a whore and has low self esteem it's not Barbie's fault, it's yours. Maybe you should have spent more time teaching the importance of self worth and less time picketing in your Birkenstock's. As a stay-at-home mom and housewife, I know exactly what brought me to where I am today. And guess what, it had nothing to do with the small cupcakes I cooked over a light bulb in my hot pink Easy Bake Oven. It had everything to do with watching my mother. If you want someone to blame for your kids problems, stand in front of the mirror and point. It's your fault, not the toys.

**Gender specific colors are only specific if you allow them to be. I bought a pink laptop. I didn't do it because pink is my favorite color. I did it because my husband thinks pink is "girlie" and it deters him from using it. At the same time my two-year-old son's favorite color is pink. I have never told him that pink is for girls. I have no right to tell him something he likes is wrong. (Unless he "likes" murdering small animals or performing sex acts on mannequins. I can deal with gay, straight and gender confused. I am not however, prepared for serial killer.) The point I'm getting to is this, the color of a toy has little to do with the reason a child wants to play with it. My kid wanted a pink kitchen play set. I bought him a blue one (because the pink was sold out) and he plays with it every day. Proving that color had nothing to do with why my little guy wanted it. He just likes whipping up FAB-U-LOUS imaginary food.

**Gender specific toys are also only as specific as you allow them to be. My house is littered with dinosaurs and toy trucks. Yet in the small toy bin, I also see a tiny set of eyes peering at me. The eyes belong to a doll my son had to have last Christmas. (He named her Karen, after a girl in his nursery school class.) Though “Karen,” spends most of her time at the bottom of the toy box, occasionally she gets taken out for a romp and her and my son have a blast together. He’s never been told that dolls are for girls and in our house, he never will be. As a parent of a young child I make the decision to teach what is and is not acceptable behavior for boys and girls. If I don't make a big deal out of something there is exactly that, "no big deal." There is no law that says pink toys are only for girls or that boys can only play with toy guns and blue dinosaurs. If you have a problem with your daughter playing with doll houses and pretend cleaning supplies maybe you should think about why it bothers you so much. Then when you figure it out stand in front of the mirror and slap yourself in the face. Why? Because you need a reality check. When was the last time you heard your kid complain that the toys they are playing with were discriminating or stereo typing their gender? Never right? That is because they don't know about any of that stuff until you teach it to them. Once again it is your fault. So stop protesting for stupid causes because you are bored and allow the rest of us to make our own choices for our kids. It would really be nice to walk through the automatic doors at Toys R Us without having to yell at you to "Shut the f*ck p and mind your own business."

Recently American idiot moms called for a boycott of Toys R Us because its Christmas catalog featured "outdated gender roles." As an non idiot American mom, I'm calling for all of them to get a hobby and take a Midol. Honestly, how do they have all this free time? Are there not enough dinners to cook and clothes to clean at their houses? Geesh!

Also feel free to leave me your feedback.I would love to hear what you think.