Grandma! What Did You Just Say?

If you haven't figured it out by now I come from a mildly dysfunctional family. Maybe dysfunctional is the wrong word. Bat shit crazy is better and this goes for my entire family, biological and extended. Now, as much as I would love to punish the whole lot of them by exposing their craziness, today is only about one; my grandma. At first glance she looks like a kind old lady, but then she opens her mouth and turns into Super Yenta, queen of the verbal bitch slap. (For my non-Jewish readers let me define Yenta for you. Yenta-(Yiddish) a vulgar shrew person, especially a woman, who is meddlesome or gossipy.)Please don't misunderstand, I love her for it. Honestly, there is nothing funnier than a 74 year old woman cursing like a sailor and talking smack. I can only hope that I'm half the Yenta she is someday.

I would like to share some dialogue from my last dinner time visit to Grandma's house. Knowing it was a gold mine of laughs, I wrote our conversation down the second I got home. I swear to you, this is all a true story. I couldn't make this up if I tried. My Grandma is hilarious. 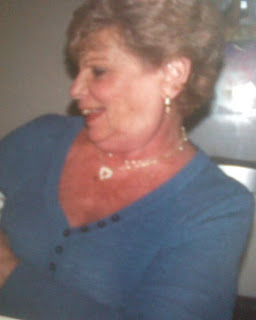 After a healthy helping of pasta and meatballs, Grandma removes both of our plates from the table and goes for seconds.

Grandma- Jennie Would you like some more pasta?
Me- No, I'm full thank you.
Grandma- You don't like my cooking, do you? Every time you come over you barely eat anything.
Me- Grandma your cooking's fine. I'm just full and I'm trying to avoid getting a big fat ass.
Grandma- What are you implying, Jennie?
Me- Nothing. I'm just trying to keep the weight off. Everything isn't always about you.
Grandma-( glares at me while raising one penciled eyebrow) Yeah, I'm sure! Well move out of my way then, you little bitch. I need to get my big fat ass some more pasta. You know, it's terrible the things you say about your poor Grandma.

Once grandma polished off her seconds, we cleaned up the kitchen and talked about my youth.

Grandma- I don't know if you remember when you were little and we went to the pool?
Me- Maybe, why?
Grandma- Well, I could have killed you that day. (She then pauses and puts the dish she was washing into the sink to look at me.) You know, after spending time with you today, I probably should have killed you.
Me- Grandma! I thought I was your favorite. You want to kill me?
Grandma- Jennie, I told you I don't have a favorite and everyone wants to kill you sometimes. Stop being such a pain in the ass and hand me the rest of the dishes.

After spending 15 minutes washing dishes so that we could put them in the dishwasher, I asked Grandma why we didn't eat off of paper plates.

Grandma-I don't like eating dinner on paper. I always use dishes.
Me- Why, does dinner taste different on a paper plate? I always use paper and trust me it's fine.
Grandma- Jennie it has nothing to do with taste, it's about having class. If you want to eat dinner like an animal at your house that's OK with me. Just don't call me to come over.
Me- You know what, the next time you come over for dinner I'm feeding you on the floor.

Grandma- Don't be so dramatic, Jennie. It's not like I would eat your cooking if you invited me over anyway....Oh, stop with the face! I was just kidding.

After clean up and coffee, we enter her living room. It contains a sofa and a love seat that she has owned for 20 years. They are both in perfect condition and look like the came straight from a 1980's Sheridan hotel.

Grandma- Jennie, I think the baby has some chocolate on his face. Wipe him so he doesn't get any of it on my couch.
Me- Grandma, there is nothing on his face. Relax, your couches will live to see another decade.
Grandma- What's wrong with my couches?
Me- Nothing, they're fine. You're just so neurotic about getting them dirty. They're couches for Christ sake. Do you plan on taking them to heaven with you or are you hoping that the Guinness Book of World Records will show up when you die an award you for having the oldest and cleanest couches in existence.
Grandma- No Jennie, I don't think I'm going to take them with me or that your smart ass book people will come. I just like my stuff to be nice. Just because you like to live in shit and allow your son to use your couches as a goddamn napkin, doesn't mean I have too. You know you're such a bitch, I think I may slap you.

Once Grandma cooled down it was time for some Yenta style gossip. Someone in her condo died and Grandma shared the news early in the morning with her girlfriend, who also lives in the condo complex. Later that day Grandma's neighbor called to inform her of the death, unaware that she already knew. Here's how she told the rest of the story. I changed some of the names, so that my Grandma will be less likely to yell at me later for embarrassing her friends publicly. (Even though none of them own or even know how to operate a computer. )

Grandma- So Velma called me and said, "Did you hear Betty died? Silvia called me this morning and told me." I said to Velma, "Yes I did. I was the one who told Silvia in the first place." Then Velma had the nerve to argue with me saying that she talked to Silvia before I did and that I was lying. Can you believe that woman?
Me- No, that's crazy.
Grandma- I know, but it gets better. I was so annoyed that she called me a liar, that I hung up on her and went on with my day. Later that evening, it must have been around 9, there was a knock at my door and it was that psycho, Velma. I was already in my night gown, so I didn't bother flipping on the light, I just cracked the door open and peaked my head out to see what it was she wanted. No sooner did I have my head outside, she starts insisting that I let her in because she has something to show me. Against my better judgement, I let the bitch in and she starts giving me the third degree about our conversation earlier in the day. She was really getting on my nerves so I said, "Velma what is it that you want, because I just don't give a damn about this and I want to go to bed." She then pulls a cordless phone out of her pocket and shoves the caller ID in my face saying,"What does that say. Just look. I told you Silvia called me before you saw her." So I snatched the goddamn thing out of her hands and said " I see what it says. It says get the F##K out of my house Velma." And then I threw the phone back at her and shoved her out the door.
Me- Grandma! That is so awful.
Grandma- No Jennie, what's awful is living next store to that f##k head!

**No joke, that's how she talks to people. It's outstanding how mean she is, isn't it? Grandma has really learned how to take advantage of her golden years. This is her philosophy: "When you're old you can say whatever you want. Why? Because people never take it seriously, they just assume you're suffering from dementia."-Grandma

Mutterings by Jennie Nadler Milechman at 9:48 AM