"People are probably trying to poison you"
"It's a conspiracy"-Walter T. Pratt

Last week my kid came down with a terrible head cold and I had to take him to the doctor. I hate going to the pediatricians office. One) because there's nothing worse than being quarantined in a room with sick children that have no regard for personal space and two) because there's never anything to read besides Highlights magazine and the toy recall binder. The toy recall binder is roughly the size of two encyclopedias stacked on top of one another and it is a real buzz kill. I hate finding toys on the list that I own. Not so much because they could potentially maim or kill my two year old, but because I spend a lot of money on these toys and I'm way to lazy to return them once they are recalled. Not that there is a point in returning them. I'm just going to use the money to buy another crappy toy that will eventually be recalled too. And God only knows what the company is going to do with the toy once they receive it. Probably repackage it and send it somewhere else in the world where people don't check lead content or care if their kid chokes to death. So to end the cycle and save a life, I toss the defective toys in the trash and go an my merry way.

(*** My little tree huggers out there try not to get you organic cotton panties in a bunch over this. I always wrap the hazardous toys in news paper, stuff them in a mess of plastic grocery bags and hide it under the soda cans at the bottom of the trash before I send them off to the landfill. I wouldn't want the lead paint leaking into our water supply any more than you would.)

Anyway, as I sat flipping through the book of doom, I found myself checking out where the defective junk was manufactured and yes, it was almost always made in China. Seeing "made in China" plastered on every page got me thinking about all the recent calls by American moms to ban Chinese made products from the USA. I wondered if it would really solve the problem. Would American made toys be safer? I decided to do some research to help me make a more educated decision. I hope my research will help you too.

When I got home from the doctors office I jumped on my China made P.C and did a little fact search. It turns out that though 96% of the recalled toys are made in China, only 10% of them are recalled because of lead paint. 77% of them are recalled do to design flaws. And do you know who was designing this junk...Stupid Americans. That's right, it was us. Did you really think the same people who are inventing robots and that PlayStation 3 you love so much would produce something as worthless as a Easy Bake Oven? No way. They simply follow the 77% of bad directions they are given and laugh at our ignorance while they do it. As for the lead paint issues, that is completely on the Chinese. They should have known better. However, I think it's an obvious case of "you get what you pay for". You can't pay people two cents and hour and expect them not to try and cut corners. These are the things that happen when you want something for nothing. And please try not to fool yourself into believing that American companies are more noble either.They find ways to cut back and make more money too. The only difference is we Americans have regulations. Regulations that still allow us to use lead paint, but show us how to do it with out getting caught. Regulations that allow small children to work in sweat shops in third world countries just so that you can save a buck when you buy a made in the USA product. So think about that when you decide to gather up your posse and boycott. If the products are not made in China that means the same idiots that design these death traps will be manufacturing them too. All while paying little children a dollar a day to do it. Does that revelation upset you? Well before you grab your torch and pitch fork think about this. Most labor shops are not filled with five year old children assembling Barbies and whatnot's while being whipped and starved. I have a close family member that was in charge of quality and shop control for a few of the big American factories and she gave me an interesting perspective on it all. The shops give these kids a place to go and make money for their family and it's a safer option than begging in the hot dangerous streets all day. The children are also guaranteed hot meals in the shops, which is more than I can say for them if they were at home with their poverty stricken families. I'm not trying to be funny or cruel. I realize not all of these child labor shops are good environments, but some of them are saving those poor kids from dieing of starvation. Just think about it before you hate-mail me or decide that your kid will be playing with home made garbage from now on because China and America are evil.

To all you boycotters who still feel China is out to get us, I want to commend you on trying to solve 10% of the problem by creating a new one. Just keep in mind that it will cost you double for that American made alternative and on top of raping your wallet, it will still be a worthless piece of junk that's probably made somewhere other than the USA. I hope this will help you choose your battle wisely....

**Sorry it was so heavy today. Let me make it up to you... I would like to send you off with a few worthless toys that were designed and made by Stupid Americans. Go USA!!!

Made and designed in the U.S of A. This fun projectile reportedly cause over 6700 injuries. All the injuries occurred because Americans couldn't figure out that Lawn Darts were made to be thrown at the Lawn and not at family, friends and neighbors. In 1988 we the people of the United States could no longer be trusted with them and Lawn Darts were pulled off store shelves. 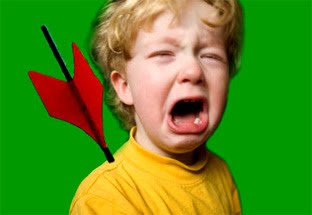 With this toy created in 1951, you could be the first kid on your block to glow in the dark. It came complete with four samples of Uranium baring ores, a Wilson's cloud chamber and a Electroscope(to measure radioactivity). Included with the American made abomination was a government manual called "Prospecting for Uranium." The manual urged kids to go out and find radioactive material with the tools provided in the energy lab. If any was found they could receive a large monetary reward. The best part of this was that it was marketed to ten year old kids. (Were you even trusted with real scissors at the age of ten?) The Atomic Energy Lab was pulled from store shelves a year after it's release. It's sad that it took Americans a full year to realize playing with radioactive material is a bad idea... 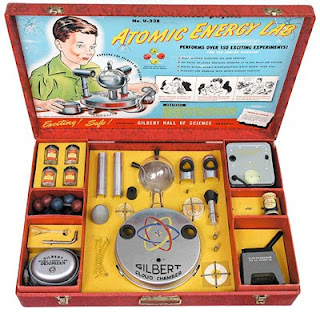 Mutterings by Jennie Nadler Milechman at 10:55 AM