Thanks Sis, Now I Feel Old And Worthless!

"Your family only tolerates you because you have some of the same genetic material as them. They are basically in it for themselves."-Walter T. Pratt

What were my parents thinking having all these kids! OK, there are only three of us, but would it have been so bad to stop at one? I understand that accidents happen, my son is living proof of that; I just wish there was a point where my parents said "three is a crowd" and stopped having children. I am the oldest of three girls and while I love my sisters unconditionally, that doesn't always mean I like them. My youngest sister Taylor, is 11 years younger than me and is really becoming a pain in my ass. Mainly because she's living La Vida Loca while I'm grudgingly pushing my cart of youth up and over the hill. It's so unfair! 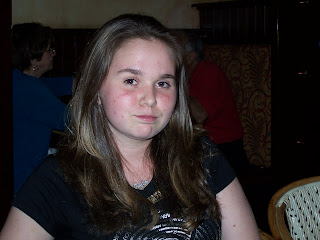 It all started less than a year ago when my mother passed away. Being the oldest, I felt the responsibility to jump in and fill my mother's shoes. Not that my dad isn't doing a great job dealing with an adolescent girl alone, because he is. I just didn't want my teenage sister to have to grow up feeling like she was missing out on the mom experience. What do I mean by the mom experience? Well, when you are a girl you go through things that no matter how hard a dad may try, he will never understand.For example, dad doesn't see why getting your period warrants a sick day or why tampons aren't sold is cases of 1000. He would also rather not deal with grooming issues and boyfriends. So, it's in this space that I step in. I go with her to buy underwear and feminine supplies. I take her for haircuts and highlights. I've shown her how to turn one eyebrow into two and most importantly I'm teaching her the art of humiliation as only a mom can. When I pick her up from school, I make sure to blast the latest Hannah Montana hit, while I gyrate uncontrollably in my seat and scream her name from the open window. When we go to the movies and she points out a cute boy she likes, I make sure to point at him and shout loudly "Taylor, that's the boy you like? He looks gay." So when I think about it, maybe I deserve some of the crap she's been shoveling my way for the past few months.

Truthfully, the stress from all life's curve balls has begun to age me. Mentally, I've always felt about 40 years old, though physically, I thought I looked years younger than my actual age. My sister,Taylor, has decided to call bullsh%$ on this delusion and knock me down a peg. She started her reign of terror one day when we were getting ready to go out to a movie together. Tay had decided we would see the latest Tyler Perry hit and have some dinner down at City Place ( a happening West Palm Beach hot spot). It pained me to have to sit through a movie that didn't contain vampires or talking animals, but I wanted her to have a good time and decided to struggle through the movie against my better judgement. I arrived at my dad's house early, so that we could get ready together and have some surrogate mother, sister time. Looking back, I can see that this is where my ageing woes began creeping in. For our night out on the town, she dressed in a pair of skinny jeans, that looked like they had been drug behind a truck for five miles and a Batman shirt.( By Batman shirt, I mean a top that's sleeves connect to the waist line in a way that makes you look like you have bat wings.) I wore a pressed black button down shirt, bootleg jeans and heals. When we were ready to leave the house we took a minute to examine each others clothing choices. I thought she looked homeless and she thought I was lame and looked like mom. On a mission to forget her earlier statement about me looking like our mother, I fished for a compliment on our drive to dinner. I did this by congratulating her on having such a young looking older sister. I told her that she was lucky to look like me, because at the age of 26 I still looked 16. Though she agreed we looked similar, she disagreed strongly that I looked younger than 30. Her words crushed me, and I knew I had to punish her. The problem with being a surrogate mom is you have no real authority. With this in mind, I had to think of a creative way to get the message across that this kind of behavior will not be tolerated. So, I put on some old school New Kid on The Block music and rolled down the windows, allowing everyone we passed on the road to see my tired, busted dance moves. She was mortified and I was sure she would keep her thoughts on me getting old to herself from now on... I was sadly mistaken!

Taylor continues to rain on my "I look good for my age" parade whenever she has the opportunity. She points out my sagging post baby skin, my stretch marks and my ghost like complexion at least once a week. To make matter's worse, she wont allow me to participate in any of her school functions. I asked her if she would get me the paper work so that I could chaperon her school's homecoming dance and she refused. When I asked her if it was because I was so young looking that her peers might mistake me for one of them; she laughed in my face. Then she told me the real reason. Apparently those busted, tired dance moves of mine are really embarrassing and she fears that someone at the dance will realize we are related. Is that any way to treat your moster?(that's sister/mother put together. I'll have to put it on urban dictionary)

Her latest attack on my youth, can only be described as criminal and is the driving force behind this blog. This weekend my baby sister stayed at my house. We went to the mall, talked about boys and had a lovely time. That was until Sunday morning. I was sitting at the computer looking up all the latest Twilight news when I noticed her standing behind me. The fact that she was so quiet should have made me realize something was up, because she just loves to criticise me for being a 26 year-old Twilight fan. A few minutes passed and the silence was broken by her gasping loudly. "What?" I asked her. By her face I could tell something was wrong."Oh, my God Jennie. What happened to you?" Now I was getting nervous. What had happened to me? I had no clue. I was just sitting quietly at the computer minding my own business. Was I bleeding and didn't know it? "Taylor, what is it?" She paused for a second and ran her fingers through my hair. "Jennie, the top of your hair is so gray! It's crazy!" She could see I was stunned by her attention to detail and quickly came up with something to make me feel a little better. "Don't feel so bad, Jen. At least your hair's not falling out like Cassie's. Now that would suck." Cassie is my middle, prettier sister and I'm sure she would be more than unhappy that Taylor threw her under the bus so quickly to make me smile.( Though I'm sure,at one time or another, Taylor has sacrificed me to make her feel better.It's not nice, but it works for us.) While the thought of Cassie holding clumps of her silky, ash brown hair in her hands wast slightly comforting, I still found myself speechless. The reality that no matter how hard I try or what I may think, I am closer to thirty than twenty was hitting me hard. So was the unfortunate truth that from now until I die, I will only get more wrinkly, grey and busted. On the upside, I do realize something little Taylor doesn't. My looks are her future and if I look like mom so does she. After all, and she said it herself, we do look strikingly similar! 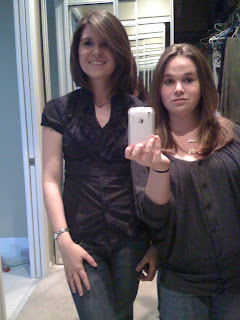 ***Thanks for reading... Just wanted to let everyone know I will be on hiatus for a week or two, working on my book. Sorry! I'm a crappy multi-tasker and really need a time out from blogging to focus. Please don't forget about me when I'm gone! I will be back the first week of November. Enjoy your Halloween!
Mutterings by Jennie Nadler Milechman at 1:32 PM