"The last time someone complimented you by saying you were a really sweet person, you knew, deep down, that wasn't true." -Walter T. Pratt

I have never been called a "sweet person" and I can guarantee after this blog I never will. There are very few things I have second thoughts about before I write, but I must admit this was a little over the safe line, even for me. I want to let you know before you read this that I mean no disrespect to anyone. I'm just trying to put things in perspective for people who tend to be overly sensitive.


Before I get down to business today I would like to share with you a few definitions...

Retard- cause to move more slowly or operate at a slower rate; "This drug will retard your heart rate."

Retarded-slow or limited in intellectual or emotional development or academic progress. "The baby was oxygen deprived at birth and it left him mentally retarded."

OK, now that you're all educated, I'll begin my lecture. In 2009 White House Chief of Staff Rahm Emanuel called a group of conservative Democrats "fucking retarded" for threatening to run attack ads against Obama's health care plan. Sara Palin, being a slow reader I guess, didn't find out about this until five months later and when she did she was mad... Being the mother of a down syndrome child she felt she had a responsibility to reprimand Mr. Emanuel and released this statement on her Facebook page;

“Just as we’d be appalled if any public figure of Rahm’s stature ever used the ‘N-word’ or other such inappropriate language, Rahm’s slur on all God’s children with cognitive and developmental disabilities – and the people who love them – is unacceptable, and it’s heartbreaking,”

Mr. Emanuel felt bad after reading such a status update and quickly apologized(through an e-card I imagine) to not only Mrs. Palin, but also to the people of the Special Olympics. Now you would think after an apology this entire debacle could be put behind them and they could get back to the important stuff (like Farmville or Mafia Wars. Get it? Because Sarah used Facebook. Ha!), but no, there's more. Rush Limbaugh has decided to take Rahm Emanuels side and did so by using the word "retard" in a broadcast tirade over 40 times. Sara Palin's response...Cue the crickets; nothing. 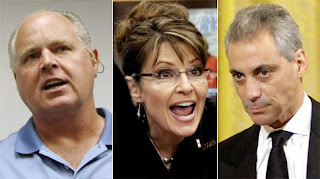 Now here's my question after reading all this, and no it's not the obvious "Why was it OK for Rush and not for Rahm." That answer is to easy to find, it's completely political and not at all interesting to me or any of my readers. The real question that needs to be asked is "Why so sensitive, Mrs. Palin?"

I think she needs to retard her anger for a minute and realize that Rahm did not call for a name change for the Special Olympics, nor did he single out anyone with a clinically certifiable mental disability. He simply stated that his party was acting like a bunch of people who were slow in the mental capacity, which if you've read the definitions above, qualifies them as retards. None of you live under a rock, you've watched CNN for more than 5 minutes in the last 10 years. He wasn't that far off in his description.

Please understand, I am not defending bigotry. I think people who use discriminating terms in discriminating manners are despicable, but I also believe that getting angry for the sake of getting angry is despicable too. My mother died of a heart attack. It was sad. It sucked. It changed my life. However, I do not find myself offended when someone uses the phrase "serious as a heart attack." Why? Because heart attacks are serious and though there are no Special Olympic qualifiers in our government, they have at one time or another, displayed retarded behavior.

Maybe I'm missing Sarah's point here. (I'd like to make an "N-word" comparison but using the word "blacks" makes me feel uncomfortable. So instead I'll use a Jew reference, because I am one and that makes it, OK.) Maybe what she is trying to say is that, like only Jews can make Jew jokes, only retarded people can call each other retards. And if that's what she meant to say, (which judging by her quote; it is not) then she again needs to examine the definition of the word and realize that Webster did not intend it solely as an adjective to describe her child or children like hers. "Retard " has always had multiple uses and it has now become as essential to the English language as any version of the word "stupid." Think of all the times Sarah used that on the campaign trail.... Hmm? I guess that proves her case more than mine, doesn't' it.

I wonder if people using the word stupid bothers Sarah's mother?
Because as Forrest Gump once said, "stupid is as stupid does," and that definition has Sarah's name written all over it.