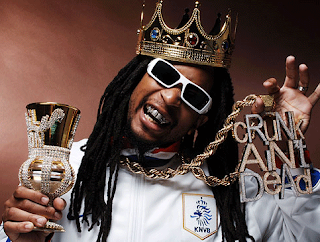 In order to provide my readers with interesting content, I've started going to places I wouldn't normally go and working jobs that I'm completely unqualified for (ex-the gun show). Recently my husband, a district manager for a wine and spirits distributor, was invited to sponsor a Birthday party for rapper, Lil Jon at a ritzy night club in South Beach.
Though I rarely listen to rap music, I thought attending this event would get me in touch with celebrities that could help further my career or at least give me a story I could manipulate and use here.

It took some persuading to get my husband to allow me to tag along. Mainly because he wasn't buying that I wanted to go just to spend quality time with him. So eventually I had to tell the truth about my motives. I explained to Steve how exciting it would be to write a blog after rubbing elbows with celebs and how one run in with J-LO could change my life. I mean, all she would have to do is pull a Mouthy Mommy shirt over her fat ass and I would be a "SUPERSTAR." I wanted to go so badly, but it was instantly clear that after hearing my reasoning, Steve-o was going to say No-No. He's one of those obnoxious idiots who could give two-shits about famous people. We ate dinner next to Tommy Lee Jones one night and when I pulled out my cell phone to take a picture of him, Steve threatened to cut my hands off with a butter knife (true story). To get him to change his mind I decided to sweeten the deal and offer him something he normally only gets on his birthday; I would clean the master bathroom and remove all the hair from the drains without bitching our asking for assistance. (We're married, where did you think I was going with that?) I also had to promise not to stalk or push my website on anyone. With my fingers tightly crossed behind my back, I agreed to be on my best behavior and set off to make arrangements for my son to be taken care of.


We thought it would be nice to make a night out of the situation and sprung for dinner at a happening Cuban place not far from the club. I tried to dress trendy so that I would fit in, but the second we pulled up to the valet stand I was reminded of what an outcast I am in this world. The valet and I apparently both shop in the little boys department of the baby gap, because we were sporting matching white button down shirts, black vests and black pants. I couldn't help but think that this would never have happened if my track suit was deemed appropriate South Beach attire.

Luckily, we entered the restaurant without having to stop for me to park any cars. This was nice because, though I could use the extra cash, I was starving and ready to enjoy some dinner. Sadly, the food was small and awful, but I did have a good time with our waiter, who looked exactly like McLovin from Superbad. (I decided to refer to him as such for the duration of our dinner.)
Once we were finished eating, my husband tipped McLovin generously for enduring my taunting, and we made our way down the club. When we arrived the line to get in was wrapped half way around the building. This would have really sucked if we weren't able to walked right past all of them and sashay straight through to the velvet ropes. We were on "The List," so there was no waiting for this diva... As we walked through a small hallway to get inside, I took a quick look around. There were no celebrities, only skinny whores. Then suddenly in the distance I could see the entrance and a few short steps latter we were in the door way. Old school Micheal Jackson was booming loudly and people were packed in like sardines. Even my stick figure of a husband had to suck it in to get into the room, but I was willing to deal with these inconveniences to see some famous faces.

By the time we got to the back bar I had been molested, elbowed and stomped on. My anxiety had built so much from the crowd that instead of scoping for celebs I started looking for emergency exits. There was simply no way I was burning alive with all these idiots if God-forbid there was a fire. While I stood crowded into a corner, I kept one eye on the nearest exit and the other on Lil Jon. He was sitting in a booth not far from me and (for the record he is of average height, but I guess in his defense "average" is harder to butcher with slang than "little") there was no one remotely famous in his vicinity. At one point I thought I saw Moby, but it turned out to be just a bald, regular gay. I know bummer, right? I gave the lackluster party a few more minutes before throwing in the towel and begging to leave. Thankfully, my husband had enough too. Especially since the corner he was shoved in had a barely legal girl pelvic thrusting in gold lamet stretch pants, complete with camel toe. I have to say though, the girl could dance. She must have spent hours practicing those moves in front of her bedroom mirror, which judging by her outfit and rats nest of a hair do, was the only thing she does in front of it.

It took us 15 minutes to shove our way out and though I didn't get to see any celebrities other than Lil Jon and fake Moby, I did get to punch a few people and make it look like an accident. It's amazes me how uncalled for acts of violence can really turn a crummy night around. I hope the next party we go to leaves me with a more exciting story and I'm guessing it will. I hear Playboy people are a lot more interesting.
Mutterings by Jennie Nadler Milechman at 9:39 PM