The Bad, The Ugly and The Tenth Good Thing About Barney?

It's yet another drama filled week for the Mouthy Mommy and I have to say, I'm one mishap away from making my runaway fantasy a reality.

Last Friday my beloved mutt came down with an auto immune disease. I was absolutely devastated, but knew that if push came to shove I wouldn't allow her to suffer. I would do the right thing and let her go.

Sadly, push came and shove went. I stumbled through my emotions and did -in the end- what was best for me. I had test run and transfusions given. I spent money on ridiculous medications and have been hand feeding home cooked chicken- several times a day- to a dog who can barely lift her head off the ground. The funny thing is, that though I couldn't bare to lose her, it was my son that made me have the change of heart. 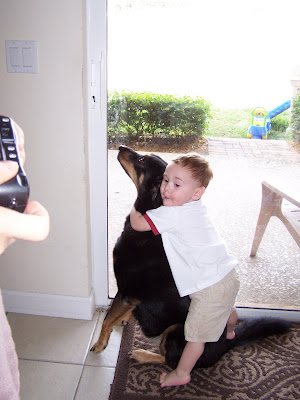 Sunday when my little monster returned from his grandmother's he wondered through the house calling for the dog. When she didn't greet him he asked me where she had gone...

ME- Watlie dog is very sick. She had to go sleep at the doctor's house to get better.

HIM- Does her tummy hurt?

HIM- Mom, I didn't give her any of my food! If she got some it was an accident.

He spent the next two days crying for her and asking questions like; "Did she drink the pool water?" and "Can she sleep here and go back to the doctor's when I'm at school?". I realized then that if I didn't do everything I could to save her, I would be left explaining the intricacies of life and death to a kid who, just a few weeks ago, stopped shitting his pants. He was smarter than I gave him credit for and I had zero idea how to tackle the meaning of death, heaven and God with a three year old.

I thought about how -less than two years ago- I had explained the passing of my mother. He was younger so it was simple: "Grandma died and went to heaven." He took the news as if I had just told him the sky was blue. It was a statement and nothing more. Later when his first fish died and then shortly after, the second too, I bluntly told him the fish died and went to heaven with grandma. To which his response was, "With Grandma and the cow that jumps over the moon? Ok, we'll buy a new one tomorrow." But now things have changed. He's inquisitive and wants to know why, how and where that heaven place is. Also he has an attachment to the dog, unlike the replaceable fish and his foggy memory of grandma.

As someone whose only religious connection is that I use the terms "goddamn it" and "Jesus Christ" a lot, I had a real tough time figuring out how to explain things without scaring him for life. I decided that because of my lack of knowledge and general distaste for all things holy, I should mosey down to his Jewish day school and ask for some support. It turned out to be a great idea because the director had loads of books to read that would explain these "taboo subjects" (her words, not mine) to him. The only thing she advised was that I read them first and edit out any things I deemed unnecessary or shocking. I did as she asked and have decided to share with you the good the bad and the ugly...

"Nothing that is alive goes on living forever. How long it lives depends upon what it is and what happens while it is alive"
Lifetimes- by Bryan Mellonie and Robert Ingpen

"It may be sad, but it is the way of all things, and it is true for everything that is alive"
Lifetimes- by Bryan Mellonie and Robert Ingpen

"They (all living things)
Mutterings by Jennie Nadler Milechman at 7:46 PM