The Apple Doesn't Fall Far From the Crazy Tree.

About three weeks ago I was feeling like crap and begged my father to fill in for me at MouthyMommy.com. He thinks blogging is ridiculous, but quickly agreed to pitch in. Though he will deny this, it was not out of the goodness of his heart that he decided to fill in for me, my father did it because he would never miss an opportunity to one up me at something he clearly feels he's more qualified to do; in this case writing. With this type of motivation I was positive that he would come through for me. Dad seemed confident and ready to blog, but he refused to agree to a deadline. (That should have been my first red flag.) I tried not to harass him to much about getting something to me in writing, but when Wednesday came and went I started to wonder what his problem was. When a week passed and nothing came I called him to check on his writing process. He assured me that there was no problem. In fact he told me he wrote three in one evening, but one was too harsh, the other was funny but not enough and I forget what the problem with the last one was. Long story short, it was all bullshit...

I ended up having to skip a week of blogging because his idea of a deadline is finishing something before they start shoveling dirt on your casket. So now three weeks have passed and I decided to ask my father-one last time- if he plans on getting a blog to me before I reach menopause. He quickly reminds me that he could write a blog "in his sleep"and adds that he wrote one at work after a customer pissed him off. He also gloats that it only took him 15 minutes to write it. It becomes instantly clear that he used this statement as proof that blogging is too easy and that he's a better writer (we'll see about that). For the record, it normally takes me hours to have something post-worthy.

After 10 minutes of dad laughing uncontrollably at his own description of said blog, I ask if he would like to send it to me to read. While my father searches for the contents in his email, he warns me that the "F" word is used quite a bit and he's concerned that it may be too obscene for me to use on MouthyMommy.com. I remind him of the Mouthy Mavens company handbook and every other blog I've posted in the last 6 months, yet he continues to insist that the language may be a bit much for my readers. I am a little put off by his concern, but then I remember that this is the same man that corrects my potty mouth by telling me that I "sound like a fucking moron." My anxiety fades and I decide that unless he just wrote 4 paragraphs with nothing, but the "F" word, there is no reason that I'm not going to post it. I then sit quietly and wait for him to send the email.

When American Idol starts and my father has no more use for me, he decides to hang up. With great anticipation I jump on my IPhone and check my email. After enjoying his first attempt at blog writing I decide it is post worthy and text him with the news. He quickly replies back to me that he would like to remain anonymous. I remind him that he should have thought of that before I read it and decide to compromise by allowing him to use the pen name "Poppa Poop deck"- (you'll see why in a moment). He is not pleased with my name choice for his alter ego and insists I sign it "Grumpa"- the name my son and nephews use for him (again, you'll see why in a moment).

Now that you've got the back story, it's time to enjoy a rant from the dysfunctional, ring-leader of my family. He kindly decided to go above and beyond for this task ( he should considering how long it took him) and included a picture to accompany his masterpiece... I hope you enjoy reading it as much as my father did! Feel free to comment when you're done. We would both love to hear what you think. 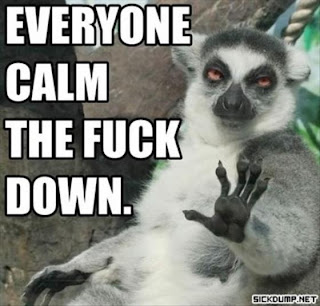 I'm writing this to all the uptight, sensitive, hypocritical, politically correct, tight asses.
I'm sick and tired of sugar coating all my words to please your big, ugly, virgin ears, and yes I already know what you are going to say..."People that curse all the time are lacking intelligence and obviously don't have a command of the English language...You know what I say to that?...Fuck You!

There are times when cursing is completely unavoidable, and in fact down right acceptable. Lets just imagine that you bought a new car. You are driving off the car lot and get down about a block when someone smashes you from behind. Why did he hit you??? Because this asshole was texting his drug dealer while steering his piece of shit, 1975 Pacer with his knees. So what do we have here.... If not an asshole what would you call this guy??? Is there another name for a 75 pacer other than a piece of shit??? And as for the damage to your car, would you say "damn that stinks" or would you go on a tirade ranting that "some asshole driving a piece of shit just fucked up your car." Of course you would pick the tirade!

One more thing, I use the word gay to describe people and situations.

No I don't think its inappropriate. Yeah, yeah, I know how you all want to save the whales, the homeless, the orphans and the gays..You know what I say to that....Bullshit, that is so gay.
By the way did you watch dancing with the stars last night??? That's gay...Ever hold your wife's purse while shes shopping???That's gay... Cry at movies...Gay... My point is that you don't have to take it in the ass or strap one on to be gay or do something gay.. So enough with the sensitive bullshit!

Today I decided to just scratch the surface on these subjects. In part because I'm lazy and mostly because its gay to write a blog. So remember the next time someone calls you gay- and you know it will happen-just tell them to calm the fuck down....And please try not to dwell on the fact that they are probably right in their assumption.